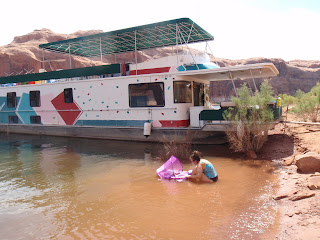 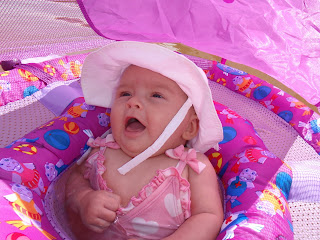 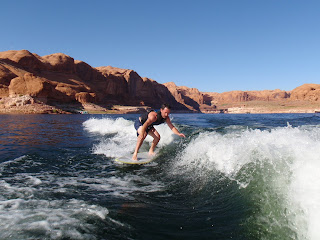 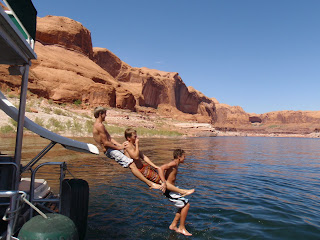 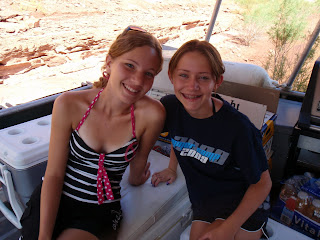 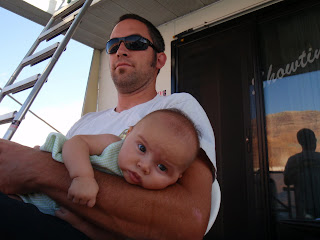 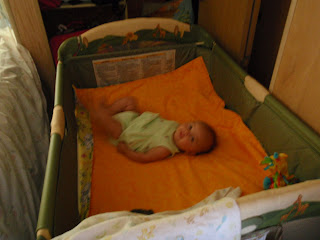 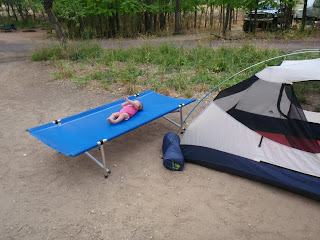 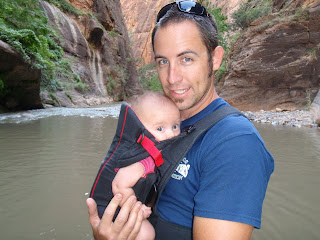 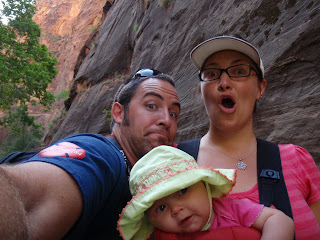 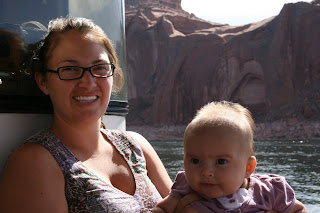 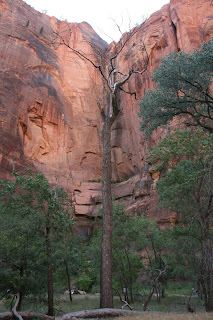 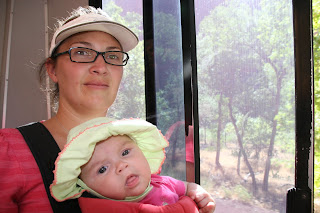 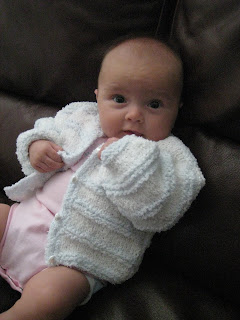 MJ has been on more family vacations in her first three months than any other baby I know! Our family hitched up Baby Bu (our boat) to Chuck (our Chevy) and headed up to Lake Powell via Zion NP. Tim drove from Temecula, leaving at 12am, to Zion NP arriving 7 hours later. Unlike the Lake Mead trip in July, we only stopped once to feed her on the way there. We spent one day in Zion NP camping for the first time in tents with Mads. She didn't nap too well, but she did stay happy watching the breeze through the trees. After a long nap for Daddy we took the tram through Zion Canyon up to the north end of the park where the "Narrows" starts. I love carrying Madeleine around in the Baby Bjorn, not only is it handy, but it is a great experience in human behavior. As we headed down the trail you can just watch all the eyes turn adoringly toward Madeleine and people whisper, "Oh, so cute" or "Look honey" as they pass. I also noticed that in younger couples it was usually the female who looked adoringly and pulled the attention of her man towards our baby. But in older couples, men as well as their wives were interested in looking at her. I wondered if this was because older men now understand how swiftly the time passed for their own children, or if they have grandkids at home who have softened their hearts, but I noted this and Tim and I commented about the interactions while we walked. We hiked the Riverside Trail which is an easy 1 mile out and back trail. We were all pretty tired from the traveling and it was still fairly hot in the canyon, so we avoided any rigorous trails. Plus, you don't want to get 3 miles out and realize that your baby will no longer be accommodating to your plans =) We had a fun time wading in the canyon- we didn't want to fall with MJ, so we only went a little. A great way to view the park is the watch Beautiful Places in HD, a video podcast- the creator recently did Zion NP. After our little outing, we shuttled into Springdale and ate at a great pizzeria called Pizza & Noodles. In November of 2006 my family had gone there on a little vaca, and the pizza was just as good this time as it was then. Mads and I had a rough night in the tent because it got cool and we had a thunderstorm come through. Tim, who was sleeping outside, had to climb into the truck to sleep- so we were all a little tired when we headed out the next day for Glen Canyon NRA and Lake Powell.
We launched on Saturday with my parents, Risers, Hinrichs boys, Simpsons and Bauers. We set out for the San Juan River arm and had a great time. We were gifted with the big back bedroom which allowed for MJ to be in her pack-n-play for naps, and she did a great job keeping to schedule. She even slept through the night one night out there. We had incredible meals, great swim time, sunshine, fun games (including Dutch Blitz!) and a great group of people on board. Thanks to my parents for giving us their room and sleeping on cots for the sake of Madeleine's comfort.

When we got home, I think we were almost ready to be done vacationing. However, we managed to squeeze in one last trip to Big Bear with Keith, Lori, Elijah and Abbie. We hitched up Baby Bu and headed up the mountain to Serrano campsite. We intended on spending two nights there. The days were beautiful, a perfect early autumn day in the mountains. We walked along the shore and just relaxed under a tree at our campsite. Lori made dinner that night and we enjoyed smores. The night was very cold! I bundled Mads in a sleeper, a jacket, socks and a hat but I still feared she would get too cold as we slept in the back of Chuck. I was freezing all night, and I even slept in my Ugg boots, in my sleeping bag. We had another hard night car camping. The sun was amazingly warm in the morning, and I nursed her under her cover in the sun to banish any night chills. We then packed for a day out on the lake. We launched with all the kids and -our two dogs- and cruised around the lake. Keith, Tim & Lori all tried some sort of watersport. Lori even attempted wakeboarding! I was so impressed that she would even get in the water. I, on the other hand, was chicken of the cold water and unwilling to board on such choppy water. As we ate lunch we decided that we didn't want to spend another night in the cold with the kids (apparently, the Trask air mattress deflated during the night, and Eli and Abbie are getting sick.) So we all decided to enjoy the day and leave after dinner that night. We spent some more time just tooling around on the water, but eventually went back to camp to give the kids time to rest and nap. After my chicken tortilla soup dinner, we made smores again and then headed down the mountain and slept in our own warm, soft beds.

Now here we are, it is autumn and I am ready for the weather to cool down. I have indulged in two pumpkin spice lattes already and have beds to be planted, pumpkin bread to be made and holidays to look forward to...I hope the weather listens to my request =) CBS class has started and I am looking forward to some sense of schedule and routine as we head into one of my favorite seasons. I feel a renewed sense of urgency to clean, organize, plan and decorate...but the weather is sapping my motivation. Maybe as I continue to exercise and lose weight I will be energized- I returned to weight watchers last week and have already lost 3.6 lbs in one week. I am so encouraged because my good friend Christina is getting married early (Jan-Feb) next year, and I don't want to be the fat bridesmaid. As I lose weight, Mads continues to put it on. She is now over 15 (probably closer to 16) pounds and is about 27 inches long! My mom and I were looking at my baby book; the height and weight MJ is now at almost 4 months, I did not reach until 7 months! It is no wonder I think she looks so grown up already! The changes this month have really made me miss the newborn stage. She won't let me snuggle and cuddle her anymore. She wants to play games, move around and observe everything. From two weeks old, I have used the signs MILK, CHANGE and SLEEP. Because of her interest in the fans overhead, I have started using FAN and CAT. She is mesmerized by the cats. She likes to watch them and listens while they meow. Every time they meow, I say CAT- MEOW accompanied by the sign for CAT. I am going to also introduce the signs MOTHER and FATHER to her (substituting the vocally "Mommy" and "Daddy" ). She reaches for objects, holds her head up 90 degrees on her tummy and will sing, screech and coo. She is getting ready to roll over, but nothing yet. Every day she understands more and more; I bought a Baby Einstein exersaucer and she is enjoying the sensation of standing- she is now interacting with toys and enjoys playing. She is drooling excessively, but I didn't get my teeth until 6 months, so we'll see what happens. She also likes playing a little rough- I shake toys in her hands fairly vigorously and she laughs. I rock her up and down while laughing into her neck and she squeals- such a fun age! Daddy also talks and sings with her and she loves to watch him and smile that adorable toothless smile. I adore hearing and watching them interact.

Tim is working to make up or pay forward shifts, so I am trying to be productive at home. After a jog in the meadow with the family last night, I was in the pool thinking about productivity. I tend to procrastinate; I also have lots of ideas, but little follow-through. I think what I will attempt is something I enjoyed on my run: Tim gave me small manageable goals for my running. He would point to a mark and tell me to jog there and back. Then he would point to another mark and tell me to sprint there and back. Then he told me to do two guy push-ups, I would attempt them and then be done. What he was doing was setting a short, achievable goal for me, and I would willingly do it knowing that it would be short, manageable and if I got tired, rest would soon be available. At home, I tend to crowd my time with so much to do that I crumble under the weight of my own ambitions. I am going to try setting short, manageable goals. I will do them immediately and finish the task before moving on. This blog was the first goal I set. Hopefully my new plan will work well for me.

Proverbs 14:23 (NASB)
In all labor there is profit,
But mere talk leads only to poverty.
-Lord, it is my prayer to use the time you have gifted me wisely, and for your glory. May my plans today be pleasing to you, and may I recognize when you are guiding me towards your plan and away from mine. Let me not be so busy, or dedicated to self that I cannot see ways you may want me to give away the gift of my time. May the desire of my heart be manifest though the work of my hands.
Love, Lauren