*Sigh*
once again I find myself not posting due to the overwhelming volume of fun adventures about which to blog. I haven't really even finished the Mt. Shasta post, nor the two weeks on an Oregon road trip. I haven't managed to load all the pictures from a week at Lake Powell on the houseboat, but I will attempt to publish one little night.
A long, long time ago, Jared bought tickets to Radiohead and invited us to come. So we planned on going, Aug. 27th with him, Christy and some guys from church. It turns out that Radiohead's concerts sell out in pretty much five minutes, so I was excited that we were going to go. I had seen them twice before and wanted to see them again considering their music is awesome.
We drove down to San Diego area and had dinner at a Mexican restaurant that I cannot remember the name of, but it was pretty good. When we got to the ampitheater, the line was wrapped around the arena. The concert was really disorganized, and we weren't sure what lines led where, but we managed to get in pretty fast considering the staff opened the far side of the gates. We laid out our blankets on the grass and I proceeded to grade papers while Tim made jokes and, as always, acted goofy. We paid $12 for a "premium" beer and were settling in when the worst band we had all ever heard opened the show.
The Liars were only lying to themselves that they could actually play any type of music. It was so horrendous that we seriously almost left. If we had to hear one more terrorized note from those idiots, I would have vomited. I hope anyone who searches The Liars gets routed to this page just to see:
THE LIARS SUCK !
Anyways, Radiohead came on and suddenly, our peaceful little stakeout on the grass was bombarded by obnoxious people from all sides. All of a sudden it was a free for all for the space around us. So not cool. We also had a group of border hoppers from TJ stand right behind us the whole show talking and laughing so loud in Spanish that we seriously could not focus on the chill sounds of York and Co. I have pretty much decided that I won't attend enormous concerts anymore. Unfortunately, they didn't really play any of their older stuff until the end, but by then Tim and I just wanted to leave. Between the high dancers to the left, the cussing Asian dancer in the front, the illegals in the back and the amount of marijuana and smoke in the air, we headed out to our car. I like a good concert every now and then, but this was kinda dissappointing, even Jared admitted that their set seemed lackluster. Oh well, back to listening to them at home. Music clear and crisp, $1 Coronas and no annoying people anywhere. So, I guess this wasn't the most fun post, but at least it's something? Check out some pics below, and Desi, Tim was going to keep his fumanchu for you, but it was annoying him, just like the people, so it left, but he looks amazingly hot with it, so enjoy! 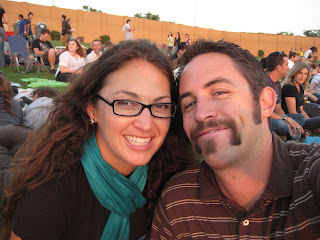 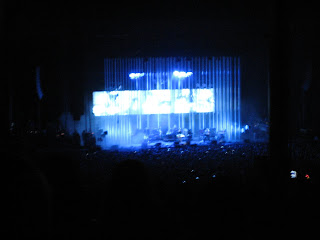 So after the let-down, we went to San Diego again to see a Padres game. We met Dan and Christina Kalberg there and we had a wonderful time. Again, the beer was overpriced, but we had great seats that were free, and the company was wonderful. The Padres won over the Rockies, and we got to check out Petco Park, which is very cool. Sometimes when we're downtown, we think about moving to a big city and living in a nice loft 13 stories up, just to have that experience for a while; however, I don't think we are going anywhere because once we have our first baby, all our family is right here, there would be absolutely no sense in picking up and moving away. So, we just need to hold on to the two houses, wait 'til the market turns, make some dough and buy a house in the country for our bunch.
Thanks to Dan and Christina for the invite- we'll see you soon hopefully. 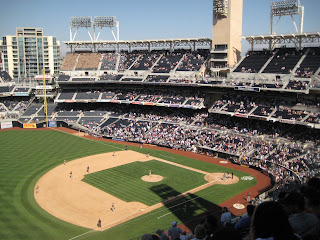 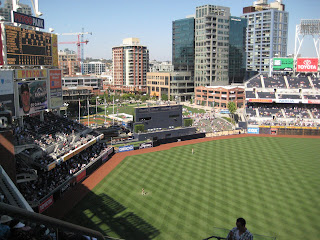 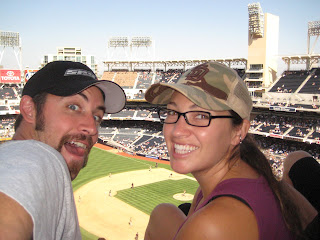 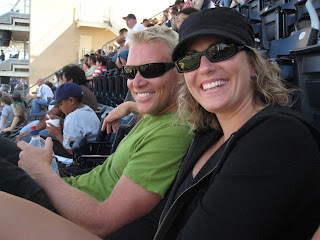 Thanks for coming down to San Diego twice and not even visiting me. :P

Just kidding. I don't have much to offer except an ocean view over Sunset Cliffs and some homeless OB hippies.

Hope the school year is going well for you. Don't work too hard. :)