It started when we kept waking up tired and achey. Well, it actually started before we were married, when Tim lived alone, and would sleep in the middle of his bed. This created a valley that both of us were rolling into throughout the night; and since I was to soon add the "third person" to our bed (aka my pregnancy body pillow) we decided a queen wasn't going to cut it anymore, and bought a king mattress hoping it would improve our sleep. After months of just stuffing linens in the closet in our hallway, I decided that moving from queen to king merited a huge overhaul of the space.
I actually forget to take a real "before" picture for my projects, so this is when the closet was cleaned out to some degree already. It was far more disorganized than this: 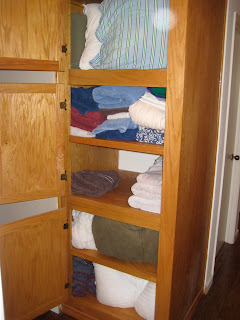 Some of the linens, piled on the bed- just to get an idea of all that was stuffed in those 6 cupboards: 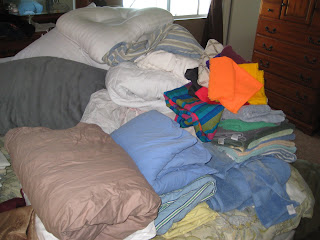 I have a weird need for symmetry or likeness (for instance, if I eat M& Ms or Skittles or anything with colors/flavors, I must have two of the same, I put one on each side of my mouth, so the other side doesn't get an unequal amount of that flavor/color- freaky, I know). So, when we got married, I bought enough green hangers to cover the Earth. Even though Tim had blue, we didn't have enough to have them all match. So, all towels that did not have an exact match were either taken to the fire station for use, or put in our car washing towel box.
Oh, and does anyone know why towels do this? These towels were brand knew, monogrammed in our "B" and after one or two washes they had these bleach-like stains in them. Many of my towels have done this- any ideas?!?!? 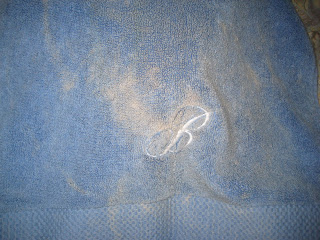 As far as the sheets were concerned, anything that was a queen set was folded and put aside, we actually had six sets because we both had beds before we were married, and we received even more when we were married. Any sheets that were singletons, or looked like the '90s inspired southwest print below were given away or discarded. 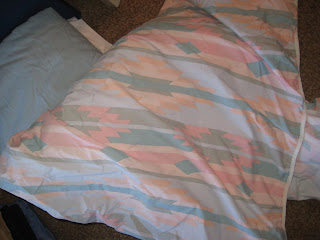 I thought I might be able to sell the sets at a garage sale, but Tim questioned who would be willing to buy old sheets? So, we gave them away to family (even though the brown one in the top right we had only used like twice). 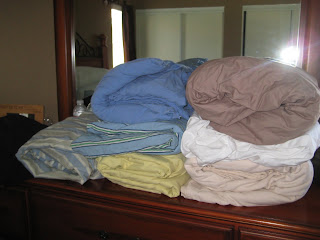 Tim has a lot of neck issues, and in looking to relieve his pain has bought quite a few pillows. They range from Walmart $5 cotton to $45 orthopedic pillows. So, I decided to keep two twin pillows for river camping, keep the orthopedic ones, and get rid of the rest. 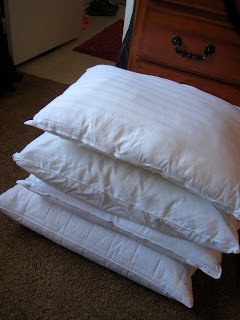 Even Mac was interested in the new roomy closet. 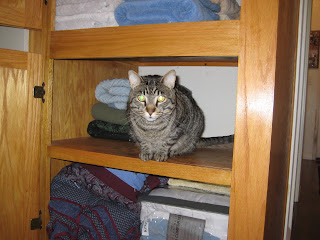 The pillows are out of the frame on top, the next shelf down are extra "heritage" blankets (afgahns my Nana made and a quilt from Tim's great aunt), the third shelf are matching towel sets with hand towels (I don't do washcloths), and in the fourth shelf I actually was able to put two boxes of pictures and one of my scrap-booking boxes. Finally, there are the queen mattress cover, three queen sets and two queen blankets for when and if we ever have a queen bed again in a guest room or if our kids sleep in one. Behind the queen mattress cover are two plastic boxes, one for table linens and the other for window dressings. 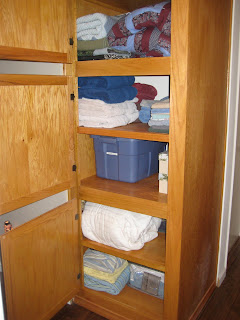 I've had towels get bleached like that and discovered it was due to various facial washes/creams I used. Benozyl Peroxide does that.

I read that. I was using BP for outbreaks (like when I first get pregnant!), but now I'm lucky if I get moisturizer on in the day =) ha ha!

I mean, I read it on the internet as I was researching this problem